This document describes how the Simple IoT project fulfills the basic requirements as described in the top level README.

IoT systems are inherently distributed where data needs to be synchronized between a number of different systems including: 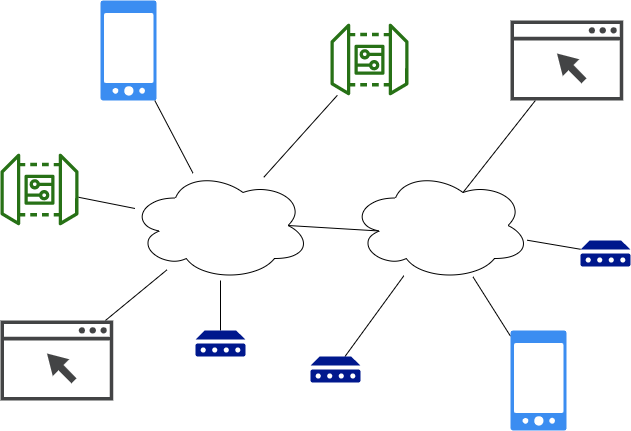 Any siot app can function as a standalone, client, server or both. As an example, siot can function both as an edge (client) and cloud apps (server).

We also need the concept of a lean client where an effort is made to minimize the application size to facilitate updates over IoT cellular networks where data is expensive.

In an IoT system, data from sensors is continually streaming, so we need some type of messaging system to transfer the data between various instances in the system. This project uses NATS.io for messaging. Some reasons:

For systems that only need to send one value several times a day, CoAP is probably a better solution than NATS. Initially we are focusing on systems that send more data -- perhaps 5-30MB/month. There is no reason we can't support CoAP as well in the future.

Where possible, modifying data (especially nodes) should be initiated over nats vs direct db calls. This ensures anything in the system can have visibility into data changes. Eventually we may want to hide db operations that do writes to force them to be initiated through a NATS message. 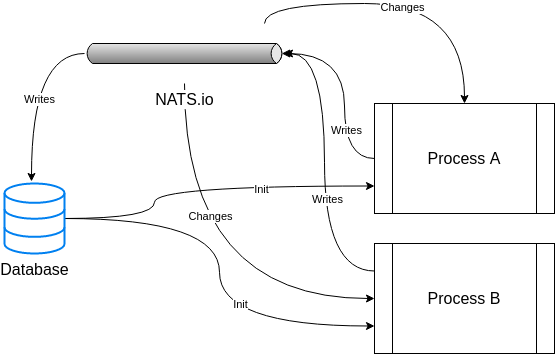 As we work on IoT systems, data structures (types) tend to emerge. Common data structures allow us to develop common algorithms and mechanism to process data. Instead of defining a new data type for each type of sensor, define one type that will work with all sensors. Then the storage (both static and time-series), synchronization, charting, and rule logic can stay the same and adding functionality to the system typically only involves changing the edge application and the frontend UI. Everything between these two end points can stay the same. This is a very powerful and flexible model as it is trivial to support new sensors and applications.

The core data structures are currently defined in the data directory for Go code, and frontend/src/Data directory for Elm code. The fundamental data structures for the system are Nodes, Points, and Edges. A Node can have one or more Points. A Point can represent a sensor value, or a configuration parameter for the node. With sensor values and configuration represented as Points, it becomes easy to use both sensor data and configuration in rule or equations because the mechanism to use both is the same. Additionally, if all Point changes are recorded in a time series database (for instance Influxdb), you automatically have a record of all configuration and sensor changes for a node.

Treating most data as Points also has another benefit in that we can easily simulate a device -- simply provide a UI or write a program to modify any point and we can shift from working on real data to simulating scenarios we want to test.

Edges are used to describe the relationships between nodes as a graph. Nodes can have parents or children and thus be represented in a hierarchy. To add structure to the system, you simply add nested Nodes. The Node hierarchy can represent the physical structure of the system, or it could also contain virtual Nodes. These virtual nodes could contain logic to process data from sensors. Several examples of virtual nodes:

Being able to arranged nodes in an arbitrary hierarchy also opens up some interesting possibilities such as creating virtual nodes that have a number of children that are collecting data. The parent virtual nodes could have rules or logic that operate off data from child nodes. In this case, the virtual parent nodes might be a town or city, service provider, etc., and the child nodes are physical edge nodes collecting data, users, etc.

The same Simple IoT application can run in both the cloud and device instances. The node tree in a device would then become a subset of the nodes in the cloud instance. Changes can be made to nodes in either the cloud or device and data is sycnronized in both directions. 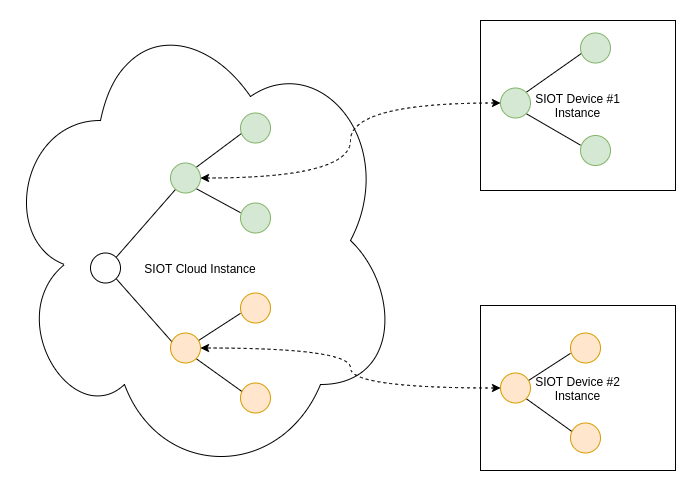 The following diagram illustrates how nodes might be arranged in a typical system. 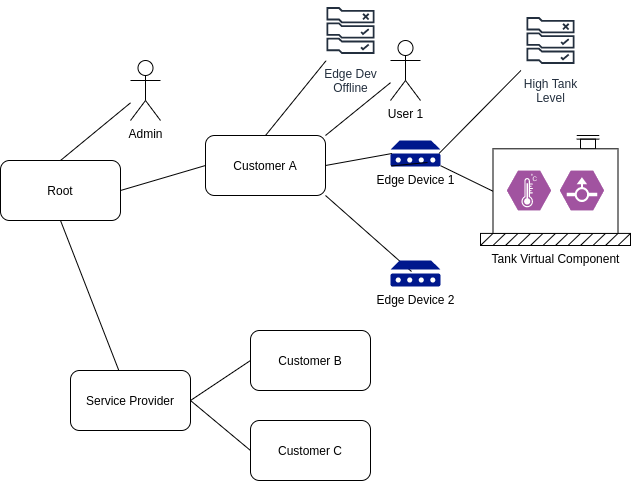 A few notes this structure of data:

The distributed parts of the system include the following instances:

As this is a distributed system where nodes may be created on any number of connected systems, node IDs need to be unique. A unique serial number or UUID is recommended.

NOTE, other than synchronization of node points, which is a fairly easy problem, this section in a WIP

See research for information on techniques that may be applicable to this problem.

Typically, configuration is modified through a user interface either in the cloud, or with a local UI (ex touchscreen LCD) at an edge device. Rules may also eventually change values that need to be synchronized. As mentioned above, the configuration of a Node will be stored as Points. Typically the UI for a node will present fields for the needed configuration based on the Node Type, whether it be a user, rule, group, edge device, etc.

In the system, the Node configuration will be relatively static, but the points in a node may be changing often as sensor values changes, thus we need to optimize for efficient synchronization of points. We can't afford the bandwidth to send the entire node data structure any time something changes.

As IoT systems are fundamentally distributed systems, the question of synchronization needs to be considered. Both client (edge), server (cloud), and UI (frontend) can be considered independent systems and can make changes to the same node.

Although multiple systems may be updating a node at the same time, it is very rare that multiple systems will update the same node point at the same time. The reason for this is that a point typically only has one source. A sensor point will only be updated by an edge device that has the sensor. A configuration parameter will only be updated by a user, and there are relatively few admin users, and so on. Because of this, we can assume there will rarely be collisions in individual point changes, and thus this issue can be ignored. The point with the latest timestamp is the version to use.

Point changes are handled by sending points to a NATS topic for a node any time it changes. There are three primary instance types:

With Point Synchronization, each instance is responsible for updating the node data in its local store.

Sending points over NATS will handle 99% of data synchronization needs, but there are a few cases this does not cover:

There are two types of data:

Any node that produces sample data should send values every 10m, even if the value is not changing. There are several reasons for this:

Config data is not sent periodically. To manage synchronization of config data, each node will have a Hash field.

The node Hash field is a hash of:

This is essentially a Merkle Tree -- see research.

Comparing the node Hash field allows us to detect node differences. We then compare the node points and child nodes to determine the actual differences.

Any time a node point (except for sample date) is modified, the node's Hash field is updated, and the Hash field in parents, grand-parents, etc are also computed and updated. This may seem like a lot of overhead, but if the database is local, and the graph is reasonably constructed, then each update might require reading a dozen or so nodes and perhaps writing 3-5 nodes. Additionally, non sample-data changes are relatively infrequent.

Initially synchronization between edge and cloud nodes is supported. The edge device will contain an "upstream" node that defines a connection to another instance's NATS server -- typically in the cloud. The edge node is responsible for synchronizing of all state using the following algorithm:

If a node is deleted, this information needs to be recorded, otherwise the synchronization process will simply re-create the deleted node if it exists on another instance. To signify a node has been deleted, the hash will be set to a blank string.

Much of the frontend architecture is already defined by the Elm architecture. The current frontend is based on the elm-spa.dev project, which defines the data/page model. Data is fetched using REST APIs, but eventually we would like to use the same synchronization method that is used in edge devices to make the web UI more real-time.

We'd like to keep the UI optimistic if possible.